You may recall that I absolutely loveeee the River of Time series by Lisa Bergren (I'd love for you to check out my reviews of Waterfall, Cascade, & Torrent). Well, I was super excited when Lisa announced the release of the 'Bourne' novella, and was even more excited to be able to review it. You can find out more about the series on Lisa's website or on the River of Time Facebook page. 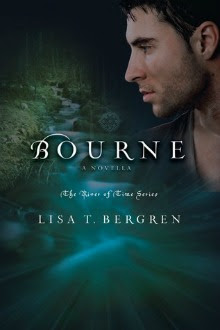 Synopsis: (from Goodreads)
BOURNE, a novella (1/3 the length of a normal novel), picks up right where TORRENT left off...Find out what has happened to men returning from the battle, gravely wounded, to the Betarrinis, fighting for the men they love, and just who is hunting them next...

My Thoughts:
'Bourne' was a great addition to this series. It's different from previous books in that it's narrated by both Gabi and her sister Lia. It felt a bit frantic at the beginning hearing both perspectives in such short bursts, but after a little bit the narration smoothed out. It was also great that you could tell the difference between the girls' narration. As sisters they obviously have some similarities, but they also have different personalities and ways of speaking. I grew to really like the insight into Lia's character, as she reflects on Luca and their relationship. Their interactions were so super cute; the light-hearted flirting was nice in comparison to Gabi and Marcello's more serious (but still fun) relationship.

I love how this novella manages to pack in romance, humour, and heart stopping action in such a short space. It was also great to see the fallout from Torrent explored, both in the personal and the political realm. Both of these are really personified in Lord Greco's character. In this volume Greco is a bit hard to get a read on, but it made me all the more curious as to where his character might go.

Really this novella was such a great opportunity to reconnect with characters I adore, and it made me all the more excited to read further adventures featuring them. To appreciate 'Bourne' you definitely have to read the previous books in the River of Time series, but if you haven't yet I urge you to pick up those books. Lisa is a very talented author, and I dare you not to fall in love with her characters.

The Cover:
Helloooo Lord Greco! Ahem, I mean... it's nice, I like how it fits with the previous books.