Mini-Review: The Future of Us by Jay Asher & Carolyn Mackler 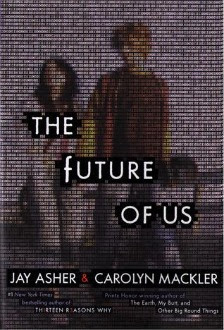 Synopsis: (from Goodreads)
It's 1996, and Josh and Emma have been neighbors their whole lives. They've been best friends almost as long - at least, up until last November, when Josh did something that changed everything. Things have been weird between them ever since, but when Josh's family gets a free AOL CD in the mail,his mom makes him bring it over so that Emma can install it on her new computer. When they sign on, they're automatically logged onto their Facebook pages. But Facebook hasn't been invented yet. And they're looking at themselves fifteen years in the future.

By refreshing their pages, they learn that making different decisions now will affect the outcome of their lives later. And as they grapple with the ups and downs of what their futures hold, they're forced to confront what they're doing right - and wrong - in the present.

My Thoughts:
‘The Future of Us’ was a book that had a fabulous concept, but I found the execution to be a bit lacking. I loved the idea of being able to see your future through Facebook, but in a way I think it could have been explored a lot more. The book also felt a bit gimmicky at times, trying to reference a zillion different ‘90s things at one time. This book was alright, but I didn’t really like Emma, one of the main characters, that much, so that didn’t help. I also would have liked more obvious progression throughout the book of Emma seeing Josh differently, rather than having a last second change of heart. I find it difficult to say much more about ‘The Future of Us’ because it was one of those books where I wouldn't say I disliked it, but I also didn’t find it particularly memorable or exciting.

The Cover:
Mehhhh. I like the concept of it a lot, but the actual final product? :/

Find The Future of Us by Jay Asher & Carolyn Mackler on Goodreads, Book Depository, & Amazon.

P.S. I had the hardest time categorizing this... I was like "contemporary... well, sort of but not really... but historical?? Um NO, labelling when I was in elementary school as historical is far too scarring. Fantasy? Well, I guess because of the magical Facebook aspect."