Guest Review: The Book Of Blood And Shadow by Robin Wasserman

Today I have a verrrrrry special treat for you guys. Making her reviewing debut on Book Labyrinth today is none other than... my Mom (!!!) aka Wilma. I've been bugging her to do a guest review for forever, and she finally agreed. =D 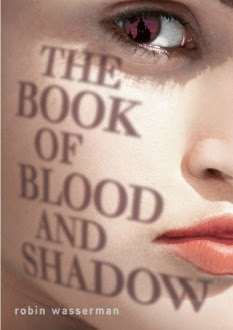 Synopsis: (from Goodreads)
It was like a nightmare, but there was no waking up. When the night began, Nora had two best friends and an embarrassingly storybook one true love. When it ended, she had nothing but blood on her hands and an echoing scream that stopped only when the tranquilizers pierced her veins and left her in the merciful dark.

But the next morning, it was all still true: Chris was dead. His girlfriend Adriane, Nora's best friend, was catatonic. And Max, Nora's sweet, smart, soft-spoken Prince Charming, was gone. He was also—according to the police, according to her parents, according to everyone—a murderer.

Desperate to prove his innocence, Nora follows the trail of blood, no matter where it leads. It ultimately brings her to the ancient streets of Prague, where she is drawn into a dark web of secret societies and shadowy conspirators, all driven by a mad desire to possess something that might not even exist. For buried in a centuries-old manuscript is the secret to ultimate knowledge and communion with the divine; it is said that he who controls the Lumen Dei controls the world. Unbeknownst to her, Nora now holds the crucial key to unlocking its secrets. Her night of blood is just one piece in a puzzle that spans continents and centuries. Solving it may be the only way she can save her own life.

Wilma's Thoughts:
I liked this book very much. It was definitely worth the time it took to read it. Because of the recommendation from Ashley I had high expectations and this book (and Ashley’s advice) did not let me down.

I very quickly took to Nora, the main character and narrator of the book. The need she felt to prove things was a good storyline. Her inability to automatically accept things as they are and her need to question made her very genuine and believable. I found myself warming to her and being frustrated at times at some of the things she did. Because of this, her character was very realistic and easy to understand. She dealt with situations in a matter of fact manner without any histrionics or whining. Even when she was faced with the pain of losing her best friend, she never gave up and moved forward in a pragmatic way at a reasonable pace. She is very level headed and takes time to rationalize and assess each situation as it comes up.

There are other great characters in this story as well. Chris was just an all around lovable guy and (spoiler alert) when he is killed, I felt very sad that he would no longer be part of the story. Eli is a character in the book that intrigued me. You are never sure if you should trust him or not but because of his endearing nature you hope he is a good guy. This definitely added to the intrigue of the story.

Two of the other characters, Max and Adriane, I never really cared for. As Nora’s girl friend and boy friend, they did some terrible things. This also, however, added to the believability of the story. It made it more credible since the things they did you could imagine it happening in real life.

'The Book of Blood and Shadow' is a bit reminiscent of The Da Vinci Code by Dan Brown. This story also has long buried secrets, coded messages, historical searches that span continents, sinister organizations, and a quest for something of the utmost religious and scientific significance that the aforementioned book has. Robin Wasserman pulls this off remarkably well. The beginning was a bit confusing but I quickly found myself completely enthralled with the story and completely reluctant to set it aside. The plot has a great balance of action sequences, peeks into history via translated notes and letters, as well as more internal struggles with grief and trust that make the entire story so suspenseful. The transition between these different sections is very smooth. This helped to make the story as a whole feel more coherent. I thoroughly enjoyed this book and even though it may be long, I ask reader to not let this deter you from reading and finishing it. You will not be disappointed.

My Thoughts:
Umm yes, I totally agree! I made some notes when I was reading this book and the first point reads "Enthralling, intriguing, devastating, wonderful". And really? That totally sums up the book. I also wrote this on Goodreads when I first finished the book: "If you enjoy foreign locations, treasure hunts, history, and relationships that will leave you reeling (and who doesn't?!), then this is definitely a book for you." So yes, pretty freaking awesome. I totally agree with my Mom that this is like the YA Da Vinci Code, because that's definitely the best surface description for it. However that doesn't fully explain the emotional intensity and character depth. I just love how this book discusses and questions truth, religion, faith, honesty, deception, love, and trust. I definitely couldn't set this one down either. It was so exciting, and it really did keep me guessing until the end.

The Cover:
I do like it, but how much prettier is the UK one?!

Find The Book Of Blood And Shadow by Robin Wasserman on Goodreads, Book Depository, & Amazon.