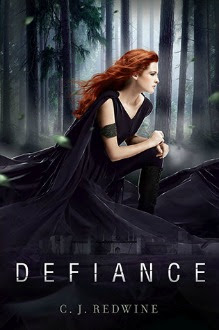 Synopsis: (from Goodreads)
Within the walls of Baalboden, beneath the shadow of the city’s brutal leader, Rachel Adams has a secret. While other girls sew dresses, host dinner parties, and obey their male Protectors, Rachel knows how to survive in the wilderness and deftly wield a sword. When her father, Jared, fails to return from a courier mission and is declared dead, the Commander assigns Rachel a new Protector, her father’s apprentice, Logan—the same boy Rachel declared her love for two years ago, and the same boy who handed her heart right back to her. Left with nothing but fierce belief in her father’s survival, Rachel decides to escape and find him herself. But treason against the Commander carries a heavy price, and what awaits her in the Wasteland could destroy her.

At nineteen, Logan McEntire is many things. Orphan. Outcast. Inventor. As apprentice to the city’s top courier, Logan is focused on learning his trade so he can escape the tyranny of Baalboden. But his plan never included being responsible for his mentor’s impulsive daughter. Logan is determined to protect her, but when his escape plan goes wrong and Rachel pays the price, he realizes he has more at stake than disappointing Jared.

As Rachel and Logan battle their way through the Wasteland, stalked by a monster that can’t be killed and an army of assassins out for blood, they discover romance, heartbreak, and a truth that will incite a war decades in the making.

My Thoughts:
I think I expected a lot from ‘Defiance’. Almost every review I’d read had been 5 stars, and there was so much excitement for it. And then I picked it up, and I was.... a bit disappointed. Conflicted, perhaps, is a better word. I had a really hard time getting into the story. I was bored at first even though I was intrigued by the concept/plot itself (contradictory, I know). Toward the middle I was really into the characters and was excited by everything going on, and then the ending fell a bit flat.

‘Defiance’ was really a rollercoaster for me, but I can still acknowledge that there are a lot of awesome parts to this book. I think most people will really love Rachel and Logan, and even the whole society that C.J. Redwine has created. This is just one of those books that on paper I should adore, that I even look back and think “why didn’t I love it??”, but that just didn’t do it for me. The uneven pacing of the book didn’t help, and while a lot of the plot and the characters were interesting, they never felt at all unique to me.

Some great parts (especially the action scenes with the Cursed One), but overall just not for me.