You may recall that I reviewed 'Dark Territory' by J. Gabriel Gates & Charlene Keel a couple of weeks ago. Well today it's all about the sequel, 'Ghost Crown'. 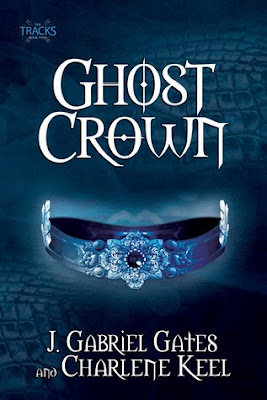 A priceless mystical treasure, a dark secret order, and a vengeful fallen angel forces collide as the battle for Middleburg continues . . .

For gang members Raphael and Ignacio, plans for the homecoming dance are almost as harrowing as their recent victory against the demonic forces that threaten their town. Despite their tentative alliance, a fight breaks out between the preppie Toppers and the goth Flatliners when Topper girl Aimee shows up at the dance with Raphael, the rival gang's leader. In the midst of an all-out rumble, the homecoming queen discovers a supernatural power that causes a potentially deadly catastrophe. Meanwhile, a charismatic half-angel, half-human arrives in Middleburg with plans to steal Aimee from Raphael.

To add to the bizarre circumstances surrounding the town, real-estate moguls begin buying up most of the Flats and evicting the tenants. These mysterious men seek a priceless treasure prophesied in ancient Chinese writings and will stop at nothing to find it. But Raphael and his friends vow to get to it first and use it to reclaim their homes.

As Raphael and the Flatliners and Zhai and the Toppers hone their supernatural abilities and search for the treasure, Aimee begins kung fu training, intent on using her new skills to locate and rescue her mother. When she discovers that the elusive treasure may be the key, the race to find it intensifies.

But there are others who seek the treasure too, and they have the power to reduce all of Middleburg, and perhaps the world, to ashes. . .

I haven't read this sequel yet, but I'm definitely psyched to check it out and see how the genre-bending continues.

This post is part of the Dark Territory/Ghost Crown blog tour hosted by TLC Book Tours. You can find the whole tour schedule here.