Rage Within by Jeyn Roberts 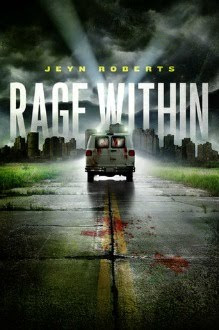 Synopsis: (from Goodreads)
In this apocalyptic sequel to Dark Inside’s “well-balanced, realistic suspense” (Kirkus Reviews), four teens continue the struggle for survival as they face a world gone mad. Aries, Clementine, Michael, and Mason have survived the first wave of the apocalypse that wiped out most of the world’s population and turned many of the rest into murderous Baggers. Now they’re hiding out in an abandoned house in Vancouver with a ragtag group of fellow teen survivors, trying to figure out their next move.

Aries is trying to lead, but it’s hard to be a leader when there are no easy answers and every move feels wrong. Clementine is desperate to find her brother Heath, but it’s impossible to know where he’d be, assuming he’s alive. Michael is haunted by the memories of his actions during his harrowing struggle to survive. And Mason is struggling with something far worse: the fear that he may be a danger to his friends.

As the Baggers begin to create a new world order, these four teens will have to trust and rely on each other in order to survive.

My Thoughts:
Even though I enjoyed 'Rage Within' from the start I do wish I had time to re-read ‘Dark Inside’ before starting this second book. Jeyn Roberts does a fabulous job with her four main narrators, but I found it difficult to keep track of the large cast of characters at first. Once my memory was jogged I found myself enjoying the book even more, especially because all of our main characters are together in one location now.

This book deals with the takeover of the Baggers, and, as you’d expect, it has a creepy and suspenseful vibe to it. You see the characters trying to survive under the radar, and there’s danger at every turn. The narrator ‘Nothing’ also continues on from the book before, and even when you have guesses as to who this is you can never be completely sure who to trust and who not to trust.

I loved the overall themes and subplots of ‘Rage Within’. You have the growing relationships between certain characters, with each person trying to fit into a role. Along with this you have questions about what makes a good leader, and who should really be in charge of the group. There’s definitely a lot of loss and hardship in the book, leading into questions about humanity and what potential for darkness might be within all of us.

If you enjoyed ‘Dark Inside’ you’ll definitely want to pick up ‘Rage Within’. It’s a fabulous second book that looks deeper into what caused the Bagger attacks to begin with. I loved how there was a parallel between this fictional world and our own, leading readers to think about how we treat the earth and its resources. If you like apocalyptic books with a deliciously creepy vibe to them then look no further than 'Rage Within'.

The Cover:
It's SO CREEPY and sinister, which basically makes it perfect for this book. ;)