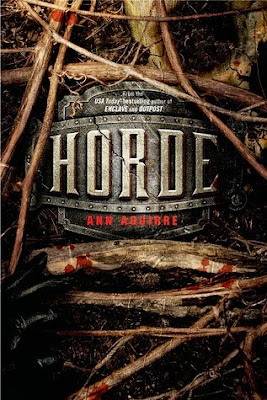 
Synopsis: (from Goodreads)
The epic conclusion to the USA Today bestselling trilogy.

The horde is coming.

Salvation is surrounded, monsters at the gates, and this time, they're not going away. When Deuce, Fade, Stalker and Tegan set out, the odds are against them. But the odds have been stacked against Deuce from the moment she was born. She might not be a Huntress anymore, but she doesn't run. With her knives in hand and her companions at her side, she will not falter, whether fighting for her life or Fade's love.

Ahead, the battle of a lifetime awaits. Freaks are everywhere, attacking settlements, setting up scouts, perimeters, and patrols. There hasn't been a war like this in centuries, and humans have forgotten how to stand and fight. Unless Deuce can lead them.

This time, however, more than the fate of a single enclave or outpost hangs in the balance. This time, Deuce carries the banner for the survival of all humanity.

My Thoughts:
This book is incredibly intense, a completely action-packed conclusion to the Razorland trilogy. I’ve enjoyed this series from the beginning, but this was definitely my favourite installment. There was a little bit of everything (action, character development, romance), and it concluded the series perfectly.

Horde features a lot of time at war. What I enjoyed (“enjoyed” being an odd word, but I’ll go with it) so much is that there real consequences and that war was never glorified. There were injuries and there were losses, and while it was sad, it was also real. Similarly, there are scenes where Deuce describes the bone tiredness she feels in long battle. Despite her skills, she’s not perfect, and she needs help from Fade or from others at times. Everything was all the more real, because Deuce is a strong and mighty character, but she’s also not invincible. I just loved how that was shown, making the book feel more real and the character more relatable.

Deuce has grown as a character throughout the trilogy, but it really shows in this book. She starts out as a Huntress, prizing the fight over anything else, but she’s learned to value people: to build a family and accept love. This book, and this series, is her journey as a warrior, but also as a person and a woman. Deuce has learned what bravery and fighting are all about. She no longer fights for glory or for the sake of fighting, but she fights for a peaceful future for her and her family.

On the romance end of things, I totally forgot how much I ship Deuce and Fade. You might not expect to find such a swoonworthy romance in a series about zombies, but these two love each other something fierce, and they are so lovely together. Horde shows such an awesome progression of their relationship.

What this book needed to really succeed was answers about the Muties, and Ann Aguirre provides them in spades. There’s a lot of discussion throughout the book about how the Muties are changing, and why they are the way they are. There are also some revelations which were definitely surprising, yet still made sense.

This book definitely wraps up the trilogy so well. I really loved how there was a happy and hopeful ending after all the misery the characters went through, but that there was also loss and a sense of the bittersweet. It left you in a good place, but it didn’t feel unrealistic. The one thing I’m not sure about is the epilogue. On the one hand it was kind of nice and sweet, but on the other hand it felt a bit cheesy and not really necessary. Either way, I am such a fan of this series, and I’m so grateful and happy that Horde was the strongest and most epic of the three books. I love when the last book of a series can remind me why I fell for the characters and the plot to begin with, and then make me want to read the series all over again, and that definitely happened here.