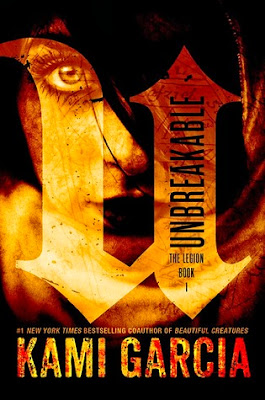 I never believed in ghosts. Until one tried to kill me.

When Kennedy Waters finds her mother dead, her world begins to unravel. She doesn’t know that paranormal forces in a much darker world are the ones pulling the strings. Not until identical twins Jared and Lukas Lockhart break into Kennedy’s room and destroy a dangerous spirit sent to kill her. The brothers reveal that her mother was part of an ancient secret society responsible for protecting the world from a vengeful demon — a society whose five members were all murdered on the same night.

Now Kennedy has to take her mother’s place in the Legion if she wants to uncover the truth and stay alive. Along with new Legion members Priest and Alara, the teens race to find the only weapon that might be able to destroy the demon — battling the deadly spirits he controls every step of the way.

Suspense, romance, and the paranormal meet in this chilling urban fantasy, the first book in a new series from Kami Garcia, bestselling coauthor of the Beautiful Creatures novels.

My Thoughts:
As soon as I read the synopsis for ‘Unbreakable’ I knew I had to read it. I really, really love books about ghost hunting, and I wish there were more of them. On top of that awesome concept, the book had a total Supernatural vibe, which I absolutely loved. Add a plot-line in about an ancient secret order that comes together against ghosts, and I am totally sold. This book was perfect because it was super creepy without being terrifying (though I’m definitely a wimp and I made sure to read the whole book during daylight hours).

The characters in ‘Unbreakable’ were interesting, if a bit stereotypical. But the way the characters fit into clichés was kind of awesome, because they still had depth to them, and they’re the type of characters who you can't help but love. Besides Kennedy, our main character, there’s Priest, the younger nerdy genius boy; Alara, the badass tough chick who's actually sweet and nurturing; Lukas, the sweet boy who's doomed to be friend zoned; and Jared, the dreamy emo boy who pushes people away. What’s great about Jared is that he easily could have been the total jerk bad boy who, as a reader, you totally don’t understand why the main girl likes him. Jared, thankfully, is not this way at all. He’s the damaged, tortured type who holds people at arm’s length, but he’s actually quite sweet to Kennedy, so I was definitely able to root for him.

The romance aspect of the novel definitely moves very quickly, and there's a bit of a love triangle as well. I feel like the flirtation could have been drawn out more, since this is the first book in the series, and the connection seemed to become quite deep, quite quickly. Still, because I did dig their connection, I could accept it and not have it ruin the book or anything.

This is a short, fast paced novel, which is awesome for action sequences, but not so great for the overall plot structure. I loved this book, but it was very much a first act. It's the beginning of a saga and it sets up the story fantastically, but there aren't a lot of real answers given. It’s more of an introduction that provides more questions for next time. That’s not entirely a bad thing, but if you’re looking for a standalone story, or even a series book with a contained plot, then you should probably look elsewhere. Despite my (relatively minor) reservations on some aspects of this book, I wholeheartedly enjoyed ‘Unbreakable’ and I'm looking forward to reading the next volume in the series.

The Cover:
It's intriguing, but it's not my favourite.