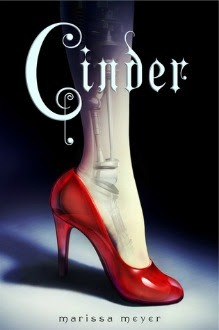 Synopsis: (from Goodreads)
Humans and androids crowd the raucous streets of New Beijing. A deadly plague ravages the population. From space, a ruthless lunar people watch, waiting to make their move. No one knows that Earth’s fate hinges on one girl. . . .

Cinder, a gifted mechanic, is a cyborg. She’s a second-class citizen with a mysterious past, reviled by her stepmother and blamed for her stepsister’s illness. But when her life becomes intertwined with the handsome Prince Kai’s, she suddenly finds herself at the center of an intergalactic struggle, and a forbidden attraction. Caught between duty and freedom, loyalty and betrayal, she must uncover secrets about her past in order to protect her world’s future.

In this thrilling debut young adult novel, the first of a quartet, Marissa Meyer introduces readers to an unforgettable heroine and a masterfully crafted new world that’s enthralling.

My Thoughts:
Um, I LOVED it. That could really be my whole review. I loved it, it was amazing, so please read it! However, I assume you might want to know why I loved it, so I will attempt to explain it. You should know, though, that I started off trying to write a more traditional review for ‘Cinder’ but it just didn’t work. I kept digressing into fangirl squeeing, so I’ve decided to write this one in point form. And yes, there is still fangirl squeeing present.

Really I could just keep going on and on about how much I loved it, but I think it would get repetitive. I fully admit that I am stingy with my 5 star reviews, but right from the beginning I fell in love with this one, and that feeling just didn’t go away. I adored ‘Cinder’ and I cannot wait to read Book 2.

The Cover:
Not my very favourite cover, but it definitely is cool and applicable to the story. 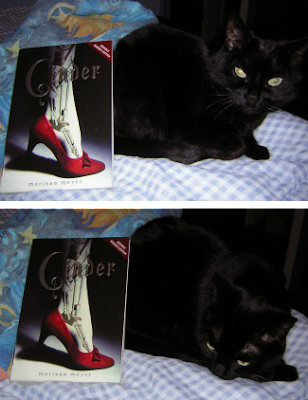 So I have this kitty named Cinder and (as you can tell from the photographic evidence) she totally wanted to pose with book Cinder. The weirdest thing, though?? Book Cinder's last name is Linh, and my Cinder's middle name in Lynn (no, I totally don't even recall why/when we gave our cats middle names). Anyway, it totally made me laugh and freak out when I first read it. 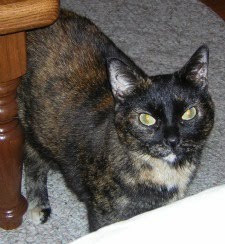 Also, Tatum wants to say hi as well, because while she is bitter and jealous there isn't a YA book with her name on it (Tatum Lee, for authors taking note), she still thinks she deserves to be a part of this post.