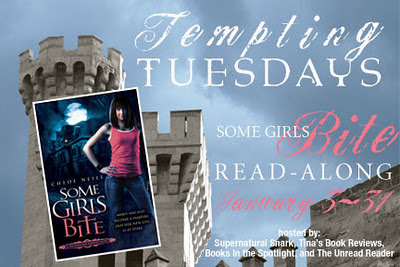 It's Week One of the 'Some Girls Bite' read-along and I'm psyched to be taking part. The read-along is being hosted by Jenny, Tina, Rummanah, & Missie, and you can find out more details about the read-along by clicking on the banner above.


Here are the questions for Chapters 1 - 4:
1. Let’s say tomorrow a “vampire manifesto” as Merit calls it runs in newspapers across the country announcing their existence. How do you think you would react? If you were hesitant to believe initially, what would it take to convince you they were real?

I think I would be skeptical from the beginning. I would think it was a joke because of the popularity of vampire movies, TV shows, and books. And there are so many fake news sites out there, like the Onion, that I just wouldn't believe right away. I think I'm too logical to believe it without proof. I guess I would need to see evidence in person in order to believe, or at least hear from credible news sources.

2. Since being turned into a vampire means complete removal from your former life and a new job serving your House in some capacity, what do you think you would miss most about the life you live now?

I think I would just miss the idea of freedom in general. It's so easy to take our lives for granted, and I think I would be like Merit and not want to give in to people's demands. I am really big into free will and choice, so I would fight the idea that someone could just take over my life like that.

3. What are your first impressions of Merit and how she’s handling all the changes in her life?

If anything I think she's taking it all in stride! I would expect a bit more drama about missing out on growing old, about being alive when your family and friends are no longer, etc. I guess based on the past two questions I'm a bit too existential to be a vampire. =b

4. When you first read the description of Ethan, what actor/model/person you know pops into your head as the perfect embodiment of him? Feel free to include pictures ;)

I think just based on the hair and physique (plus Mallory's mention of him) I keep thinking about David Beckham, but that doesn't quite work for me. Is it too on the nose to pick Alexander Skarsgård for a hot blonde vampire? I think he totally works for Ethan, but I can't wait to see everyone else's choices. 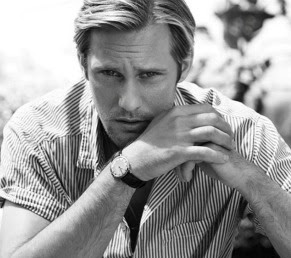 5. Do you think Merit’s anger at Ethan himself, not the situation, is justified?

I think it could be justified in a way. When it comes down to it, it was Ethan's decision to change Merit, and that's a very personal action that he needs to take responsibility for, even if he thought he was doing the right thing. I think Merit's anger in general is completely justified, and whether she's angry at Ethan or not she needs an outlet to express that anger, and he's the easy target.