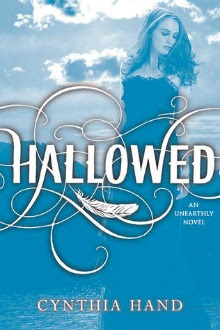 Synopsis: (from Goodreads)
For months part-angel Clara Gardner trained to face the raging forest fire from her visions and rescue the alluring and mysterious Christian Prescott from the blaze. But nothing could prepare her for the fateful decisions she would be forced to make that day, or the startling revelation that her purpose—the task she was put on earth to accomplish—is not as straightforward as she thought. Now, torn between her increasingly complicated feelings for Christian and her love for her boyfriend, Tucker, Clara struggles to make sense of what she was supposed to do the day of the fire. And, as she is drawn further into the world of part angels and the growing conflict between White Wings and Black Wings, Clara learns of the terrifying new reality that she must face: Someone close to her will die in a matter of months. With her future uncertain, the only thing Clara knows for sure is that the fire was just the beginning.

My Thoughts:
What can I say about this one?? Such a good (and incredibly emotional) follow up to ‘Unearthly’. ‘Hallowed’ gives readers a continued connection with the main characters as the love triangle amps up. This series deserves an award for one of the best love triangles ever, though. I love how the love triangle has a purpose to the story, and that both guys are worthy of Clara.

There were some shocking moments in ‘Hallowed’ and some heartbreaking ones as well. More details about the angel mythology are revealed, and Clara learns secrets about her family and about the past. This aspect was fascinating, as was the continued discussion about purpose. I liked how the idea of free will was brought up, and whether or not angel-bloods have choices.

Cynthia Hand’s flowing prose will have you holding your breath as you keep turning pages to see what will happen next. This is such a great series, and ‘Hallowed’ offers revelations that will make you look at events from ‘Unearthly’ in a completely different way. I never thought I would fall in love with an angel series, but these books have proved me wrong. An incredible second installment that will leave you wanting Book 3 pronto (!) in order to find out more about Clara and her purpose.

The Cover:
So pretty!