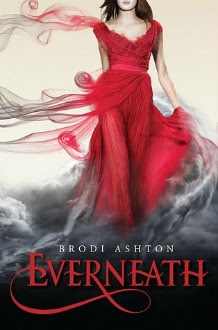 Synopsis: (from Goodreads)
Last spring, Nikki Beckett vanished, sucked into an underworld known as the Everneath, where immortals Feed on the emotions of despairing humans. Now she's returned- to her old life, her family, her friends- before being banished back to the underworld... this time forever.

She has six months before the Everneath comes to claim her, six months for good-byes she can't find the words for, six months to find redemption, if it exists.

Nikki longs to spend these months reconnecting with her boyfriend, Jack, the one person she loves more than anything. But there's a problem: Cole, the smoldering immortal who first enticed her to the Everneath, has followed Nikki to the mortal world. And he'll do whatever it takes to bring her back- this time as his queen.

As Nikki's time grows short and her relationships begin slipping from her grasp, she's forced to make the hardest decision of her life: find a way to cheat fate and remain on the Surface with Jack or return to the Everneath and become Cole's...

My Thoughts:
Sometimes when you have a narrative that flips back and forth between different times it can be confusing or hard to read, but thankfully that isn’t at all the case with ‘Everneath’. Of course it was a bit frustrating to not know all the back story and to have to work to find it out, but it was definitely in an “omigosh, I need to know!!!” type of way that kept me turning the pages.

Nikki is an interesting character. She’s hard to get a read on because she’s had all of her emotions sucked out of her, but I thought the way she was written was perfect. Her voice was engaging enough while also staying true to the experiences she had been through.

‘Everneath’ explores a really heartwrenching relationship between Nikki and Jack, and the book keeps you dying to know what will happen between them as you read on. I also love how even though there are two guys present in Nikki’s life it’s not a love triangle at all in the way you would expect.

Generally ‘Everneath’ really impressed me with with its fascinating use of different mythologies, most specifically the story of Persephone. The ending of the book was what I predicted, but getting to that point was incredibly twisty turny, and it left me wanting more.

The Cover:
I like it. Especially the smoke element.