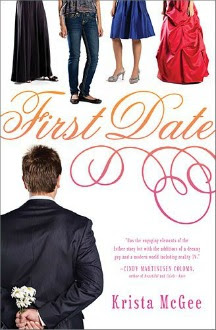 Synopsis: (from Goodreads)
Addy Davidson discovers God's unexpected plans for her life when a reality TV show turns her quiet existence on its head.

The orphaned daughter of missionaries, Addy is quite content to stay in the shadows and never draw attention to herself. But when she's selected for a reality TV show to try to become the President son's prom date-a show she didn't audition for-she's suddenly in America's spotlight.

The lights, the make-up, the competitions, and the blogs discussing every move she makes all make Addy incredibly uncomfortable. But through her time at The Mansion, Addy comes to realize that first impressions aren't always right, that hiding out may not be what God had planned for her life, and that her faith should affect everything she does. It may just be that her selection wasn't random at all and that she's on this show "for such a time as this."

My Thoughts:
This was a really cute clean read that I think would be especially good for younger teens. I think I would have enjoyed this one even more at the end of elementary school/beginning of high school, just because of the content and the message. It sounds strange to say this, but this is Christian fiction that is very Christian. It’s not that I didn’t agree in most places, it’s just that it felt very in your face, which isn’t something I’m used to.

As I side note I want to point out that the one part that I was really taken aback by was the journal of Addy’s mom from when she was starting out as a missionary. The tone of her journal seriously shocked me. It was full of such first world American Christian superiority and looking down on the indigenous people that it really rubbed me the wrong way. I should also point out that Addy’s mom was praying to understand these people and to try and give up her attitude, but I just didn’t think the way some things were phrased were necessarily at all. (This is such a minor part of the book I feel weird even bringing it up, except that it really stuck out to me).

Back to the main plot: I thought the competition aspect was super cute. I can’t see a First Son ever going on this type of show, but it was amusing and entertaining. I also really adored the innocent and sweet affection that grew between Addy and Jonathan as the competition went on. Overall this was really just a cute book (I know, I can’t stop saying 'cute'!). It was a bit saccharine overall and melodramatic at times, but mostly it was just a quick read that was strong enough to keep me reading until the end.

The Cover:
Kind of exactly what you would expect for this type of book, and I actually do mean that in a good way.