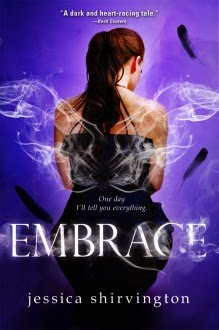 Synopsis: (from Goodreads)
It starts with a whisper: “It’s time for you to know who you are…”

Violet Eden dreads her seventeenth birthday. After all, it’s hard to get too excited about the day that marks the anniversary of your mother’s death. As if that wasn’t enough, disturbing dreams haunt her sleep and leave her with very real injuries. There’s a dark tattoo weaving its way up her arms that wasn’t there before.

Violet is determined to get some answers, but nothing could have prepared her for the truth. The guy she thought she could fall in love with has been keeping his identity a secret: he’s only half-human—oh, and same goes for her.

A centuries-old battle between fallen angels and the protectors of humanity has chosen its new warrior. It’s a fight Violet doesn’t want, but she lives her life by two rules: don’t run and don’t quit. When angels seek vengeance and humans are the warriors, you could do a lot worse than betting on Violet Eden…

Look for the sequels ENTICED in September 2012 and EMBLAZE in March 2013!

My Thoughts:
I was so hoping I would appreciate this book, but in the end it left a bad taste in my mouth. In the beginning I was really excited about it. The writing was strong and the characters were interesting. I loved the dynamic between Violet and Lincoln and I couldn’t wait to see where it went. Then came the big paranormal reveal, and everything sort of went downhill from there. Just a warning, this review might be more spoilerly than my usual ones, because I feel like I have to reveal a bit more to explain my problems with the book. So step away now if you don’t want to read spoilers!

So, we have our main character Violet. Everyone has been describing her as such a strong heroine, but I just didn’t see it. I think she tried to have some kind of control over her life, but she wasn’t very successful. She had a lot to deal with, but instead of actually, you know, dealing with it she tried to sweep it under the rug. Violet is so upset that she can’t have a normal life, yet she decides to spend all her time with an exiled angel. Not sure of the logic on that one. And not only does she spend time with him, she decides to date him as well, although I really don’t know when that decision was made. It just seemed to randomly happen, and I was completely lost. Violet claims to love one guy but when things go crazy she decides to have sex with the other guy. Oh, and she thinks about the other guy while doing it. At this point I just felt like throwing my book across the room.

This book is obviously about a love triangle. Despite all the other angel and Grigori mythology going on (which was actually interesting, and pretty well done), the love triangle takes most of the book’s focus. But of course it couldn’t be two guys who are actually decent. No, first we have Lincoln who is a good guy, but who because he’s Violet’s Grigori partner can’t actually be with her (why?? I didn’t feel like this was explained at all, except that it was Forbidden). And of course Lincoln also lied to Violet for 2 years about her real identity, so maybe he's not actually the best guy ever. And then there’s Phoenix who I can’t even begin to describe, and not in a good way. He’s the aforementioned exile, and he can control emotions. He is absolutely disgusting. He uses his seduction techniques to force himself on Violet, but then because he has the strength to pull away, Violet somehow feels bad for him. I just... I don’t even understand the whole dynamic. Basically, Phoenix disgusted me, and Violet’s reactions to him disgusted me as well, perhaps even more so.

As I mentioned, the mythology aspect was pretty well done. I was interested in the history of the Grigori and watching Violet try and figure out her powers. I just wish the love triangle hadn’t taken over, so perhaps we could have learned more background in the first book. Where the book ended up was interesting, though fairly predictable. It made me a little bit less angry with the book’s events, but not enough to feel that favourably toward it. I don’t like things that mess with your head, and this whole book was full of what I will very maturely refer to as WTFery. Honestly, there were things that just made me so confused and others that made me so angry. I have a feeling this book will appeal to fans of the Fallen books or Hush, Hush and maybe even Twilight. In other words: not me. Plenty of people seemed to really adore this one, and I can absolutely appreciate the writing style (for a debut? awesome!), but the actual plot and characters turned me off way too much to be a fan.

The Cover:
I reallllly like the colour and the smoke and even the feathers. I think it could have been more interesting, but it's still pretty cool.