Catherine Stine on Reinventing YA Sci-Fi

I'm pleased to have author Catherine Stine here today on Book Labyrinth to share her thoughts about the YA Sci-fi genre.


YA Sci-Fi, Reinventing the Genre
By Catherine Stine
Everyone loves to imagine worlds! Take, for instance, the magical Oz with its flying monkeys and glitzy Emerald City, or a sci-fi where people travel through time and space as in Cloud Atlas. We love to frighten ourselves with imagining the dangerous terrains of The Hunger Games and Divergent, where one must pledge an allegiance to a faction that excludes one’s own family. But what is science fiction, and how does it differ from fantasy? It’s defined as writing rationally about an imagined future that could be—our imagined hopes and fears. Fantasy deals with magical elements, such as demons and spells, and paranormal is a genre within fantasy, although paranormal abilities can also be part of a plausible sci-fi narrative.

In YA science fiction, a few years ago this wasn’t the case. Why? Because high fantasy and paranormal were all the rage, so editors were nervous about sales for sci-fi. This was partly because classic sci-fi was gadget-heavy, as in Star Wars and no one really realized that the rules could change! Plus, editors were worried that most, but not all YA readers were teen girls, and weren’t sure that they would want their sci-fi. Boy, were they wrong! It just took time, and time for YA authors to reinvent the genre. Teen readers demand adventure, romance, meaty ideas to chew on, and a coming-of-age element.

Now, happily, the YA sci-fi stampede has arrived! Sci-fi for teens is comprised of many blends: from Rossi’s romantic Under the Never Sky, to Ryan’s space opera, The Sky Chasers, to the bio-tech of Pearson’s The Adoration of Jenna Fox. The permutations are endless! Check out Margo Berendsen’s YA sci-fi survey below.

In my YA sci-fi, Fireseed One, I combine post-apocalyptic elements of a likely future earth in 2089, with lots of inventive touches that lighten the load, such as hybrid plants that grow fish up on vines, and simulation rides that replicate the glaciers and ice shards of days gone by. Oh, and lots of fiery romance in a literal, burning Hotzone! I’m working on book two now, called Scarlet’s Fire, where the adventure will continue into themes of hybridization and recognizing who one is after a world of change. (2013 spring release).

It’s a great time to be writing YA sci-fi, and I look forward to lots of new creations!

Thanks, Book Labyrinth, for inviting me to guest post.
-- Catherine Stine

Where to find Fireseed One: on Amazon, B&N, & Goodreads
Catherine on the web: her blog Idea City, Goodreads, Facebook, & website
Margo Berendsen’s “Sci-Fi survey” for all of the subgenres here. 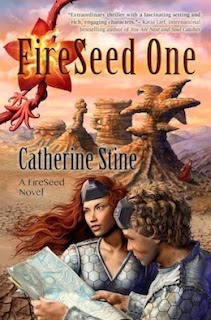 What if Only Your Worst Enemy Could Help You Save the World?

Fireseed One, a YA futuristic thriller, is set on earth in 2089 where people ride tricked-out amphibious vehicles over toxic waters, dance in ice-themed clubs and eat fish that grow up on vines in floating warehouses. Varik Teitur inherits a vast sea farm after the mysterious drowning of his marine biologist father.

When Marisa Baron, a beautiful and shrewd terrorist, who knows way, way too much about Varik's father's work, tries to steal seed disks from the world's food bank, Varik is forced to put his dreams of becoming a doctor on hold and venture with her, into a hot zone teeming with treacherous nomads and a Fireseed cult who worships his dead father, in order to search for a magical hybrid plant that may not even exist. Illustrated by the author! Recommended for those who like a dash of romance with their thrillers.

Here is an interior illustration which Catherine drew for the book: 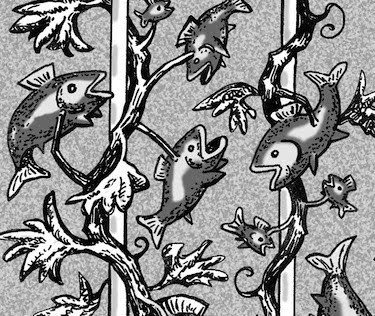 Thanks so much for stopping by, Catherine! I love how excited you are about the genre, and I'm glad to see that it's flourishing.