The Differences Between Writing a
Movie Script and a Novel
by Leigh Dunlap
I originally wrote “Halifax” as a screenplay. Writing in that format is something I understand. I guess you could say it’s my native tongue. When I sat down to convert the script into a book, however, I discovered I had to go back to my high school self, telling stories that used actual quotation marks and verbs. So much about writing scripts is telling a story with extreme brevity. You have a few lines to describe a character or a location or action and you’re doing it with the knowledge that a team of hundreds of people is going to take your map and go on a journey, joining together to bring your story to life. They all have ideas of their own and their own particular skills that help tell that story. The costume designer has an idea of how a character should dress and an actor has his or her own take on how a character should walk and talk.

Whether on screen or on the page, you are trying to say the same thing, just in two different ways. For instance, below are descriptions of the lead character in “Halifax”. First from the script:


FARRELL HALIFAX comes running around a corner and stops in the middle of the street, out of breath. He is sixteen and handsome --- in a slightly goofy way. He falls somewhere between Peter Parker and Spiderman on the confidence scale.

When they are casting a movie I’ve written I want to make sure I’ve opened a character up to as many choices of actors as possible. I don’t want him to have red hair and freckles and one arm shorter than the other unless it’s integral to the story. I hope to put in just enough to give a director and an actor an idea of what the character is like without stifling their creativity.

In “Halifax” the book, this is how I described the same character:


Farrell. It was a good name. A name someone would remember, but not necessarily remember for any particular reason. Farrell, the sixteen-year-old boy bearing that name, was much the same. Although a good-looking young man, you wouldn’t remember him for it. His light and floppy hair was too long to be preppy, but too short to be cool. His voice was pleasant enough. Steady. Neither slight nor deep with no specific accent. He was neither short nor tall. Not fat. Not slim. Farrell was very...medium. He could be the captain of the soccer team or the president of the chess club. It all depended on just how memorable he wanted to be.

I pretty much said the same thing but hopefully in a more complete and satisfying way. In the end, I believe a movie is a story told by the hundreds of people who work on it. A book is a story told by two people --- the author and the reader, both using their imaginations.

Leigh Dunlap is the screenwriter behind the hit movie "A Cinderella Story" starring Hilary Duff. She also wrote "Spy Girls", based on the popular teen book series, for producer Lawrence Bender (Pulp Fiction, Good Will Hunting) and "Camp Rockaway" for Sony Pictures and producers Doug Wick and Lucy Fisher (Gladiator, Stuart Little). Her project "16-Love" starring Lindsey Shaw and Chandler Massey, recently finished principal photography. "Halifax" is Leigh's first novel and combines two of her favorite things to write about --- Science Fiction and Romance. Leigh is a graduate of the USC School of Cinema-Television and lives in London, when she can, with her husband and son.

Be sure to visit Leigh's website & add 'Halifax' on Goodreads. 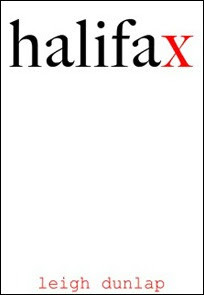 When the Halifax siblings arrive at Lexham Academy, they don't seem any more or less odd than any other students. They have more important things to do, however, than take exams or find dates for the prom. They have aliens to kill. With the help of his sister Izzy and brother Rom, Farrell Halifax has to stop an escaped alien and save the Earth --- though that's hard to do when the captain of the basketball team is after you and you're falling in love with his cheerleader girlfriend --- who may or may not be an alien herself. Halifax is a teen Torchwood meets Buffy the Vampire Slayer --- with a little bit of The Breakfast Club thrown into the mix.

I love that distinction between how many different authors that each art form has, but also including the fact that readers do very much have a voice in how a book is read and interpreted. I definitely agree with this model of reading. I like how both versions do say the same thing, just one of them is more detailed. Thanks for sharing your thoughts, Leigh!