The Shifters series by Rachel Vincent 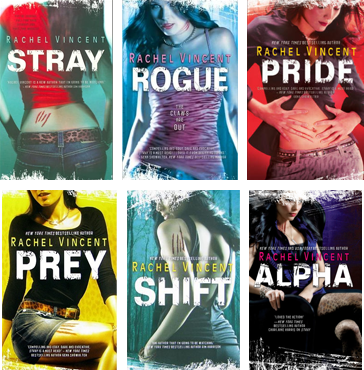 Goodreads Links:
1. Stray
2. Rogue
3. Pride
4. Prey
5. Shift
6. Alpha
(Extremely Short) Series Synopsis (from Rachel Vincent's website):
Rachel’s Shifters series follows Faythe Sanders, the world’s only female werecat enforcer, as she fights to define her own role in her family and to claim a place in her Pride. The revolution is coming, and Faythe will be leading the charge. Are you ready to meet the new Alpha?

Synopsis for 'Stray' (from Goodreads):
There are only eight breeding female werecats left . . . And I'm one of them.

I look like an all-American grad student. But I am a werecat, a shape-shifter, and I live in two worlds.

Despite reservations from my family and my Pride, I escaped the pressure to continue my species and carved out a normal life for myself. Until the night a Stray attacked.

I'd been warned about Strays -- werecats without a Pride, constantly on the lookout for someone like me: attractive, female, and fertile. I fought him off, but then learned two of my fellow tabbies had disappeared.

This brush with danger was all my Pride needed to summon me back . . . for my own protection. Yeah, right. But I'm no meek kitty. I'll take on whatever -- and whoever -- I have to in order to find my friends. Watch out, Strays -- 'cause I got claws, and I'm not afraid to use them . . .

My (Relatively Spoiler Free) Thoughts:
Faythe is a very strong and stubborn character. She can be frustrating, but as a reader you love her for how she grows as a character throughout the series. You also admire how much she loves her family and her pride, and how she stands up for her fellow tabbies and for what she believes is right.

I really loved the increasing political aspect in the later books of this series, with inter-pride rules and a very evil/power hungry alpha of another territory. There is also such a great community of characters to these books. You can really feel the family connection and the love between the enforcers and other pride members.

For me, personally, the romance aspect to these books was lacking. I really didn’t like Marc as a character or as a love interest. A lot of times I did think Faythe should have treated him a lot better than she actually did, but I still didn’t think he was all that great. He was far too angry of a character for my liking, especially because physical violence came along with his temper. It felt like we never got to know Marc as a character besides his protective element and how sexy he was. Now if we want to talk about how much I adored Jace and how I thought that storyline should have gone, well that’s a whole different story.

Overall I did enjoy this series because I got really attached to the characters. There are emotional moments that will break your heart, especially in the last couple of books, but there is also a humourous aspect to them. This is a series that gets stronger as it goes, and I can definitely see why so many people are fans of it.

The Covers:
They're okay. I like the various colours and the font treatment for the series.

(This was released as an adult series, but I could see it falling into the 'new adult' category, as the books start with Faythe as a grad student. There is mild sexual content, but I can definitely see this being a crossover series for older YA readers.)