How Do You Write Convincing Female Villains? Start With The Real-life Examples
by Emily Devenport
When I was a kid, I asked my mother if she believed that evil existed because of an evil force in the universe, a sort of absolute evil. I expected her to think hard about this concept, then give me a lengthy answer outlining possible sources of evil. But her response was fast and simple: “No. Evil is simply the absence of good.”

I felt a bit disappointed. But the more I thought about it, the more it made sense. If good is compassion, kindness, love, fairness, responsibility, honor, and integrity, the absence of those qualities is pretty scary.

I've known both men and women who fit that definition of evil. Though a person like that often sees him/herself as the hero, they are usually villains. But are male and female villains the same kind? Do they behave the same way and have the same qualities? In fiction, you can make them that way – after all, you're trying to get the reader to suspend disbelief. You don't have to write truth to do that. But if you look at real people, some differences do exist.

For instance, I once worked as a correctional officer for the Arizona State Prison system, and I met many female inmates. Forget about the stuff you see on TV about these gals. They're very different from the male inmates. Though women commit murder, theft, fraud, child abuse, and assault, they're less likely to choose physical aggression as their first weapon. Women rely on psychological warfare much more readily than on physical violence. And this may be the heart of our difference.

Even ethical women resort first to psychology in their daily interactions with people. Women who commit crimes can be brilliant at this – especially if their crime is fraud. Men are just as good at this sort of crime, but when you break down the profile of convicted male offenders versus female offenders, you'll find they trend in different directions, with many more female offenders jailed for fraud and theft. When you look at violent crimes committed by women things get really interesting. Violent women tend to be particular types.

Take serial killers. Men will actively hunt people. Women are more likely to be poisoners. Male serial killers look for strangers on whom to act out their aggression – women poison friends, family, and/or rivals. Oddly, for both male and female serial killers, asserting power seems to be one of the rewards for this kind of violence. But I think the oddest thing about women who poison is that they often love their victims. I suspect that men poison people to assert control, women poison when they fear they're losing control.

You can find female serial killers who have hunted and killed strangers, but almost never as loners. These women usually act in partnerships, often as lures who put people at ease. They usually partner with boyfriends or husbands. In these cases, the motive is sexual, and murder is part of the thrill. There have also been women who teamed up with men to murder people for the purpose of robbing them. In history, some women lured travelers to false inns. While the women served them supper, the male cohorts sneaked up behind the hapless travelers and bashed them over the head.

Maybe the most despised female villain is the Terrible Mother. She abuses and neglects her children, inflicting lifelong scars. She is engaged in relentless torture, focusing all of her rage on victims who can't escape. This villain is ruthlessly self-absorbed, and all too real. Sometimes she kills her victims, or allows someone else (usually a boyfriend) to do so. Terrible Mother can also be a “Ma Barker” type who controls her adult children and sends them out to commit crimes. She may be old and frail, but they fear her. She is a master of psychological warfare.

What fascinates me is that people seem to feel more anger toward the Terrible Mother than they do toward the Terrible Father. Maybe this is because mothers, even though they're not perfect, are almost always nurturing, loving women who try to do what's best for their families. When they do the opposite, this isn't just selfish and cruel, it's the most damaging betrayal anyone can suffer. If mother doesn't love you – who possibly could?

Often, people feel contempt for women who commit violent or non-violent crimes. This is a huge mistake, because you're likely to underestimate someone for whom you feel contempt. Women who commit crimes may have a lot of shortcomings, they may lack most or all of those good qualities I listed at the beginning of this post – but they have spent their lives watching other people with an eye toward exploitation. Assuming that they're not as smart as you because they can't see the line between right and wrong is almost as bad as assuming you're not capable of ever crossing that line yourself. This is precisely the sort of assumption that will get you to do something unwise – and the sort of situation writers love to exploit when they're figuring out ways to challenge their protagonist. After all, it's not what goes right that makes an interesting story, it's what goes wrong. And if your protagonists are going to see things differently at the end of a story, it's sometimes very entertaining when the villains have figured out a way to get them to put their own butts in a sling.

The wonderful thing about writers is that they can get us to feel sympathy for the She Devil. The really good ones don't do that by making excuses for villains – they trick us into it. By doing so, they give us a perspective we would never have if we only saw things from the protagonist's point of view. Sympathy for the She Devil can mean that you realize she is more complicated than black & white definitions of good would leave us to believe. 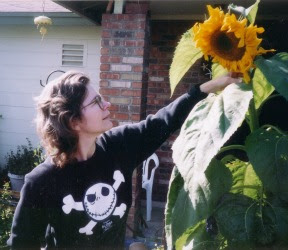 About Emily:
I'm a writer -- Emily Devenport, Maggy Thomas and Lee Hogan are the pen names I used when I wrote my novels. I've been published in the U.S., the U.K., Italy, and Israel. My novels are SHADE, LARISSA, SCORPIANNE, EGGHEADS, THE KRONOS CONDITION, GODHEADS, BROKEN TIME (which was nominated for the Philip K. Dick Award), BELARUS, and ENEMIES. Look for my new novels, THE NIGHT SHIFTERS, SPIRITS OF GLORY, and PALE LADY on Amazon, Barnes & Noble, Goodreads, Kobo, Sony, Apple, and Smashwords. I'm married to artist/writer Ernest Hogan -- check out his Mondo Ernesto blog. I write reviews on amazon as Emily Hogan. Like most writers, I have an eye for the weird, and that's what I like to blog about. You can contact me at emdevenport(at)gmail.com. 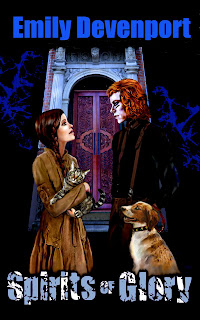 One morning the people of the North woke up and the people of the South were gone. That s the first thing every child learns on the colony world of Jigsaw. But for one girl, knowing about The Disappearance is not enough. Hawkeye wants to know why.

That's why she spent half her life researching The Disappearance. And that's also why eight Neighbors show up on her doorstep, demanding that she accompany them into the Forbidden Cities ruled by the Southern gods to speak with the Spirits of Glory. Everyone thinks Hawkeye is an expert on Neighbors, these almost-humans who move, talk, and think as if they were born inside one of the Time Fractures. But she can't imagine what they want to ask the ghosts of their ancestors, or why they need her to go along. The Southern gods caused every human inhabitant of the Southern cities to disappear overnight :&emdash; what else might they do?

But the Northern gods say Hawkeye should go and her curiosity won't let her refuse, even though she's going into more danger than she can imagine. Pain and puzzlement wait along the broken interstate, along with scavengers who want to kill them all. Hawkeye's questions only generate more questions as they move farther and farther into the South, right into the heart of the Disappearance, until Hawkeye's questions have all been answered.

Even the ones she was afraid to ask.

Be sure to add 'Spirits of Glory' on Goodreads & visit Emily's blog here.

Emily has been kind enough to offer up a Smashwords ebook of 'Spirits of Glory' for one lucky winner. Fill in the Rafflecopter below. International, open until 12:01 am EST on 12/06.