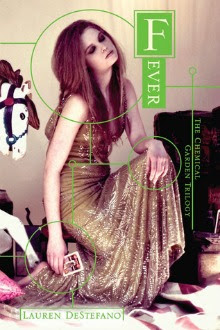 Synopsis: (from Goodreads)
Rhine and Gabriel have escaped the mansion, but danger is never far behind.

Running away brings Rhine and Gabriel right into a trap, in the form of a twisted carnival whose ringmistress keeps watch over a menagerie of girls. Just as Rhine uncovers what plans await her, her fortune turns again. With Gabriel at her side, Rhine travels through an environment as grim as the one she left a year ago - surroundings that mirror her own feelings of fear and hopelessness.

The two are determined to get to Manhattan, to relative safety with Rhine’s twin brother, Rowan. But the road there is long and perilous - and in a world where young women only live to age twenty and young men die at twenty-five, time is precious. Worse still, they can’t seem to elude Rhine’s father-in-law, Vaughn, who is determined to bring Rhine back to the mansion...by any means necessary.

In the sequel to Lauren DeStefano’s harrowing Wither, Rhine must decide if freedom is worth the price - now that she has more to lose than ever.

My Thoughts:
I saw someone describe this book as “emotionally exhausting”, and that is so truthful. When I was reading the book, and even when I finished it, I was so unsure about how I felt. I definitely didn’t like it as much as ‘Wither’, but I was (and still am, in a way) unclear about whether I even liked it or not.

‘Fever’, in a lot of ways, suffers from second book syndrome. So many crazy things happen and yet I feel like the overall plot of the series barely moved at all. Yes, there were some crazy revelations and happenings, but I don’t think an entire book was needed in order for them to come about. The events of the beginning of the book were so frustrating to me that I actually peeked ahead to see if the characters would get themselves out of that situation, which is something I never usually do. So much of the book is covered by an inescapable haze, and while it’s stylistically brilliant (to make the readers themselves feel addled takes talent), it does little for the plot itself. ‘Fever’ is a book of journeying, but the journeying seems wasted, and the characters themselves seem like puppets. I realize this was probably done intentionally, but it was just sad and confusing to see mere shadows of characters who were interesting in the first book, or at least far less passive.

I’m still incredibly interested by the world and characters that Lauren DeStefano has created, and I have hope that Book 3 will be as great as I found ‘Wither’ to be, but ‘Fever’ just seems like a confusing mess. This book was crazy intense and action packed, but while parts of it had glimpses of the brilliance of ‘Wither’, those glimpses were unfortunately few and far between.

The Cover:
I can't believe this is the cover after how gorgeous the cover of Wither was. I love the symbolism still, but the colour choices are unfortunate.