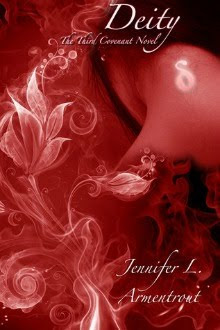 Synopsis: (from Goodreads)
"History is on repeat, and things didn't go so well the last time. "

Alexandria isn't sure she's going to make it to her eighteenth birthday--to her Awakening. A long-forgotten, fanatical order is out to kill her, and if the Council ever discovers what she did in the Catskills, she's a goner... and so is Aiden.

If that's not freaky enough, whenever Alex and Seth spend time "training"--which really is just Seth's code word for some up-close and personal one-on-one time--she ends up with another mark of the Apollyon, which brings her one step closer to Awakening ahead of schedule. Awesome.

But as her birthday draws near, her entire world shatters with a startling revelation and she's caught between love and Fate. One will do anything to protect her. One has been lying to her since the beginning. Once the gods have revealed themselves, unleashing their wrath, lives will be irrevocably changed... and destroyed.

Those left standing will discover if love is truly greater than Fate...

My Thoughts:
I really enjoyed ‘Half-Blood’, and I liked ‘Pure’, but ‘Deity’? Let’s just say that this book brings back the awesomeness of book 1 and kicks it up a notch. The book starts off with repercussions of what happened at the New York Covenant in ‘Pure’. And as if Alex doesn’t have enough on her plate with her Awakening quickly approaching, she also has to deal with both those who want to harm her, and with the two guys she has a connection with.

One reason why these books are so great is the characters. Alex is a great narrator because she’s just hilarious. She’s also reckless and self-sacrificial, but you can’t help but like her, especially because she has a good heart and wants to fight for what is right. And the two guys? Well, I definitely have a preference between the two, but they are both really interesting and well developed.

I feel like this book upped the ante in almost every way. I absolutely adored the romance that happened later in the book and there was also so much going on, including some jaw dropping action moments. Without getting too spoilery I thought it was an amazing decision to bring the gods into play. We’ve heard so much about them in the series, that having them more present raised the stakes even more.

I have to say that I’m really intrigued by the mythology and complex politics of these books. Seeing where everything is headed, my head was spinning trying to figure out how there could possibly be an eventual HEA. ‘Deity’ features an ending that will leave you absolutely dying for the next full length Covenant book. The Covenant books have always been fun, but ‘Deity’ is the best installment yet. This is a must-read series for fans of mythology based books.

The Cover:
Definitely not my favourite of the series, but I do love the colouring.

Check out Jennifer on the following sites:

GIVEAWAY
Spencer Hill is running a giveaway as part of the tour, and there will be three winners. You could win: a $25 Amazon giftcard, a copy of the book, a shirt, and lots of SWAG. Open internationally. See widget for full details.

There are also swag giveaways going on for promoting the tour:

US Only --
a Rafflecopter giveaway


You can find the whole blog tour schedule HERE.