When Derek approached me to feature his novel The Vampire Way on Book Labyrinth I asked if he had anything to say about libraries. It turned that that he actually works in a library, and his novel involves the library as well! Here, Derek talks about freedom to read, boundary pushing, and the influence of libraries on him.

Libraries by Derek Clendening
Jo Godwin said “A truly great library contains something in it to offend everyone.” I agree. But I feel the same way about fiction. Even the light-hearted fiction we read for fun can stand to push a few boundaries. In fact, I relish that type of book as long as boundaries aren’t pushed just for shock value.

My young adult novel The Vampire Way pushes several boundaries. Would someone be offended? There’s always the possibility but I hope readers and their parents will see the method behind my madness. The novel deals with some serious issues for teens and does so in a fairly frank manner. I would like to think I trust a young reader’s intelligence in being able to handle those issues while enjoying fiction.

What place does such a book have in a library? I hope it’s a fairly secure one. As a library professional by day, I believe in the freedom to read and that very few topics are off limits. And again, I draw the same parallel with fiction. Topics considered to be taboo by some should be open for exploration by curious and inquisitive minds. That’s how I feel, at least.

As you can probably tell, the library has influenced my life significantly. Having lived in the same town my whole life, I have numerous childhood memories in the very library that has been my workplace since high school. To me, the library is a central place and should be significant for all members of a community. Good libraries strive to keep up with the curve and know how to remain relevant in an increasingly electronic society.

In The Vampire Way, two central characters work as pages at the Fort Erie Public Library, just as I had as a teenager. The library influences them just as it did me. But it’s more than that. It can serve as an anchor for a smaller community and I hope that it helps to create a believable small town atmosphere in the novel.

As for boundary-pushing, I hope it’s okay to consider real life trials and tragedies such as death, teen alcoholism, teen suicide, teen pregnancy and eating disorders in young people. As a man influenced by his library, and who supports the freedom to read, I hope that the topics explored in The Vampire Way will enlighten young readers about the reality of these things in their lives. 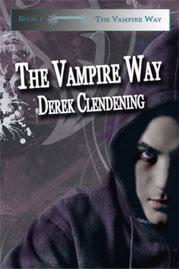 Thanks so much for this post, Derek. I absolutely agree with you about the freedom to read!


You can read more about Derek and his books on his blog.

'The Vampire Way' is available for sale in paperback and through Kindle or Smashwords.