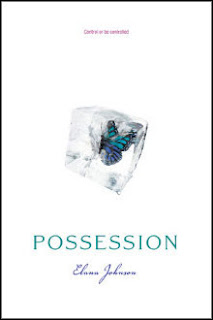 Synopsis: (from Goodreads)
Vi knows the Rule: Girls don't walk with boys, and they never even think about kissing them. But no one makes Vi want to break the Rules more than Zenn...and since the Thinkers have chosen him as Vi's future match, how much trouble can one kiss cause? The Thinkers may have brainwashed the rest of the population, but Vi is determined to think for herself.

But the Thinkers are unusually persuasive, and they're set on convincing Vi to become one of them...starting by brainwashing Zenn. Vi can't leave Zenn in the Thinkers' hands, but she's wary of joining the rebellion, especially since that means teaming up with Jag. Jag is egotistical, charismatic, and dangerous--everything Zenn's not. Vi can't quite trust Jag and can't quite resist him, but she also can't give up on Zenn.

This is a game of control or be controlled. And Vi has no choice but to play.

My Thoughts:
I wasn’t sure what to think when I started this book. Some people have loved it, and others, well, they have not. I went in hoping I would be part of the crowd who loved it (obviously! you never want to dislike a book), but unfortunately this was not the book for me. I found it completely confusing. There were so many scenarios and so many random paranormal-y abilities, I just didn’t know what to think. It also felt like pieces of technology were thrown into the story when they were convenient instead of being described ahead of time and then used in appropriate places.

One huge point of contention I have with ‘Possession’ is the extremely weak “heroine”, Violet. Vi flails around a lot, letting other people control her. It feels like she is a possession of the literally controlling “love interest”, Jag. I’m not sure what redeeming qualities Jag has except for his really cool hair (seriously. Hair is described a lot in this book). He continually lets Vi down and gets pissy at her when she doesn’t do or say what he wants, which is annoying enough to begin with, but then he also keeps secrets from her the whole time, seeing no problem with that. Violet, to her credit, gets mad about this over and over again, but then she just lets him manipulate her again and again, forgiving him each time because they “love” each other. Even though she starts off the book supposedly loving this other guy, Zenn. Sigh.

This book is a very strange combination of ‘Matched’, the ‘Uglies’ books, and ‘The Giver’, except without the engaging characters and interesting plot line. I wasn’t the biggest fan of ‘Matched’, but at least it made sense. This book throws you into the action straightaway and gives little to no explanations for anything that’s going on in the world. The writing was generally good, except I hated how Vi continually started her thoughts with the word ‘Yeah’ -- as in, ‘Yeah, I wasn’t doing that’ or ‘Yeah, I loved him.’ Yeah, it got a bit annoying. And then there was Jag calling Violet ‘babe’ all the time which just totally made me cringe with its cheesyness.

Meh. I just definitely wasn’t feeling this one. I made it to the end because I wanted to see why people loved it so much, but otherwise I definitely would have stopped reading it about 120 pages in. Despite so much action happening I was really bored almost the whole time, PLUS after all that reading (400-ish pages) there is a mega cliffhanger! I can’t believe the story just stops. Usually a cliffhanger would entice readers to go on the next book, but with this one? It’s okay, really. If I feel the need to find out what happens next I’ll read some spoilery reviews on Goodreads once Book 2 comes out.

So. As with any negative review I feel obliged to say that there are definitely people who loved the stuffing out of this book, so maybe you’ll like it too. Check out the link to Goodreads below to read some of the positive reviews.

ETA: I just read that 'Possession' is supposed to be a standalone. I... I don't even know what to do with that information. This makes me like the book even less, knowing there's absolutely no resolution at all for the characters.