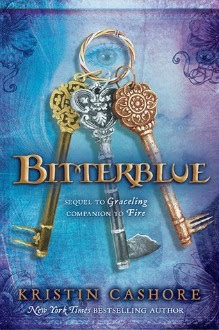 Eight years after Graceling, Bitterblue is now queen of Monsea. But the influence of her father, a violent psychopath with mind-altering abilities, lives on. Her advisors, who have run things since Leck died, believe in a forward-thinking plan: Pardon all who committed terrible acts under Leck's reign, and forget anything bad ever happened. But when Bitterblue begins sneaking outside the castle--disguised and alone--to walk the streets of her own city, she starts realizing that the kingdom has been under the thirty-five-year spell of a madman, and the only way to move forward is to revisit the past.

Two thieves, who only steal what has already been stolen, change her life forever. They hold a key to the truth of Leck's reign. And one of them, with an extreme skill called a Grace that he hasn't yet identified, holds a key to her heart.

My Thoughts:
I’ve been anticipating this book for years, so it’s hard to say why I waited 4 months to read it. I think a lot of it had to do with that wait, and almost not wanting the trilogy to be over. I was finally in the mood to tackle this last book (it’s a long one!), and while I do have some conflicting thoughts on it, I definitely wasn’t disappointed.

My first reaction to this book was that it is gorgeous. The cover is beautiful, but so is the book itself. The key on the front and the key theme throughout was absolutely wonderful. The end papers are an amazing design, and each section of the book has incredible artwork. I truly love ebooks, but this is one where the actual reading experience was increased by having the tactile experience with a real book.

I loved this book primarily because of the characters. I loved getting to know Bitterblue as an adult, and I loved being reunited with characters from the previous books. Bitterblue is such a lovely character, because she’s grown up in such difficult circumstances and she’s dealing with so much responsibility, yet she’s not a brat. She’s a lovely young woman who wants what is right for her people. She has strength that she doesn’t know of, but she also has real flaws and insecurities, like any of us. I also enjoyed getting to know the people of the Monsean court, reading more about beloved characters like Katsa, Po, Raffin, and Bann, and even seeing different sides of characters from previous books.

While I loved this book for the most part there were two things that stuck out to me. The first is that this is an incredibly long book that probably could have been edited down a bit. There’s such a focus on day to day minutia and repetitive scenes that could have been taken out. The other thing that stuck out to me is that the ending was quite open. I don’t need a detailed Happily Ever After with every tiny problem solved, but I would have liked some more concrete assurances, rather than the actual ending which felt like more of a beginning. It's not that the ending was bad at all, it just made me want more books about these characters in the future, rather than making me content with where things were.

Despite the lengthiness and some repetition I was glad for more time with these beloved characters. While this wasn’t a perfect book for me, it is still a five star read because of the great characters, and because it tied the previous two books together in such an interesting way. I look forward to reading more of Kristin Cashore’s writing in the future.

Here are some examples of how gorgeous the book is inside: 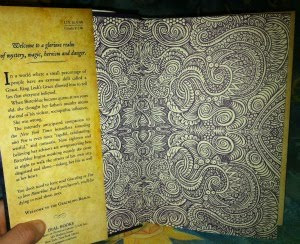 The title page, continuing that pattern: 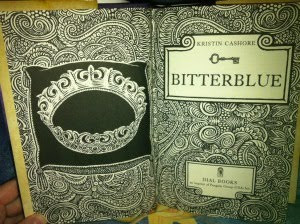 There's artwork on the title page of each part: 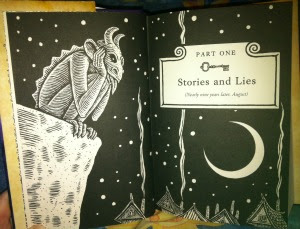 That's only a little bit of how beautiful the book itself is. You'll have to pick it up to see all the artwork, including the maps and pictures at the back of the book.