Your Thoughts on Stormdancer by Jay Kristoff 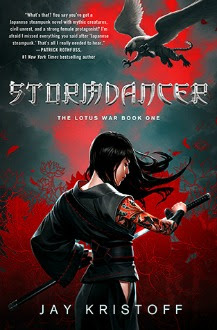 A DYING LAND
The Shima Imperium verges on the brink of environmental collapse; an island nation once rich in tradition and myth, now decimated by clockwork industrialization and the machine-worshipers of the Lotus Guild. The skies are red as blood, the land is choked with toxic pollution, and the great spirit animals that once roamed its wilds have departed forever.

AN IMPOSSIBLE QUEST
The hunters of Shima’s imperial court are charged by their Shōgun to capture a thunder tiger—a legendary creature, half-eagle, half-tiger. But any fool knows the beasts have been extinct for more than a century, and the price of failing the Shōgun is death.

A SIXTEEN YEAR OLD GIRL
Yukiko is a child of the Fox clan, possessed of a talent that if discovered, would see her executed by the Lotus Guild. Accompanying her father on the Shōgun’s hunt, she finds herself stranded: a young woman alone in Shima’s last wilderness, with only a furious, crippled thunder tiger for company. Even though she can hear his thoughts, even though she saved his life, all she knows for certain is he’d rather see her dead than help her.

But together, the pair will form an indomitable friendship, and rise to challenge the might of an empire.

Stormdancer by Jay Kristoff seems to have taken the book blogging world by storm. It's being released in North America as an adult title, but it's definitely one of those crossover books.

I haven't had a chance to finish 'Stormdancer', so I thought I would take a look at what some of my fellow bloggers have been saying about the book:

Yukkiko can definitely give any strong female character a run for their money. The girl is strong, resilient, beautiful, and can wield a weapon like no one else. Love her. ... This is one of those fast paced books that kept me up late to finish reading it. So freaking great! Stunning novel. I am in awe of the world Jay Kristoff built. A must-read y’all seriously.

Kristoff’s writing is very descriptive with a lot of adjectives. It is very easy to picture the world created by the author. Stormdancer is not the sort of book you should expect to tear through, but the type of book one savors and takes time with. If you are an impatient reader, straight up you will not like this book. ... If you like sophisticated storytelling, tough as nails main characters, revolutions and Eastern based fantasy, Stormdancer by Jay Kristoff is worth a few days of your reading time.

Jay Kristoff's writing is Whedonesque. This is one of the highest compliments I can pay because I think Joss Whedon is absolutely brilliant. He writes beautifully complex female characters living in gorgeously imagined worlds where no one is safe and anything can happen. And you know what? Jay Kristoff does, too.

Unfortunately for this book, I did find the beginning rather slow to start. It stemmed from the combination of elaborate description and establishing the setting and its residents, customs, and culture. Once the book got into the main story, the main plot, it moved along at a much faster pace. ... Even though the book was slow to start and rather heavy with world-building backstory, I believe that fans of epic fantasy will enjoy it, especially those looking for an Asian twist on the standard epic fantasy that often has British roots.

-- Lindsay from Me On Books

Be sure to check out the kind of epic and definitely hilarious book trailer as well:

Stormdancer will be released on September 18 (this Tuesday!), and is already released in Australia and the UK.