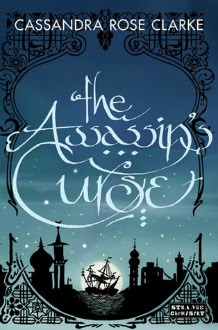 Synopsis: (from Goodreads)
Ananna of the Tanarau abandons ship when her parents try to marry her off to an allying pirate clan: she wants to captain her own boat, not serve as second-in-command to her handsome yet clueless fiance. But her escape has dire consequences when she learns the scorned clan has sent an assassin after her.

And when the assassin, Naji, finally catches up with her, things get even worse. Ananna inadvertently triggers a nasty curse — with a life-altering result. Now Ananna and Naji are forced to become uneasy allies as they work together to break the curse and return their lives back to normal. Or at least as normal as the lives of a pirate and an assassin can be.

My Thoughts:
This book features pirates, magic, a blood curse, and an assassin. Why yes, that does sound awesome, and ‘The Assassin’s Curse’ lives up to its insanely amazing premise. I actually enjoyed ‘The Assassin’s Curse’ more than I was expecting to, which made me fall in love with it all the more, if that makes sense. It's not every day that a book surpasses your expectations. The concept of this book in general is one that’s been done before, but Cassandra Rose Clarke has made it all her own with amazing characters and phenomenal world-building.

Ananna is a strong and determined character who has grown up as part of a pirate clan. She is witty, smart, and has a great deal of compassion for others, though she wouldn’t like it if you pointed that out. She’s also all kinds of adorable, though she would hate to hear that as well. As her match we have Naji, who is totally the strong and silent type, but who you can just tell is secretly amused by Ananna (Check out Asher's Book Boyfriend post about him for some well-deserved Naji flailing). I really loved how Ananna and Naji brought out different sides in one another and made each other stronger, even if they didn’t realize it most of the time.

This book features some truly fascinating world building. There’s an Arabian Nights-esque feel to the desert and the seaside markets, and there are also pirate guilds and northern islands that none willingly traverse. There’s tricky magic, and a 'working towards a quest' element. Really there’s just so much awesome-ness that it’s hard to describe it all.

‘The Assassin’s Curse’ truly deserves to become the next big hyped YA novel. The writing is fresh, the characters are interesting, and the plot will drag you in and leave you wanting more. I absolutely enjoyed this reading experience.

The Cover:
I love it! The whole concept is gorgeous, but it's also in my favourite colours, which doesn't hurt.