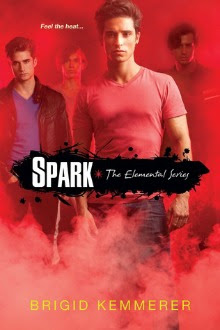 Gabriel has always had his brothers to rely on, especially his twin, Nick. But when an arsonist starts wreaking havoc on their town, all the signs point to Gabriel. Only he’s not doing it.

More than Gabriel’s pride is at stake -- this could cost him his family, maybe his life. And no one seems to hear him. Except a shy sophomore named Layne, a brainiac who dresses in turtlenecks and jeans and keeps him totally off balance. Layne understands family problems, and she understands secrets. She has a few of her own.

Gabriel can’t let her guess about his brothers, about his abilities, about the danger that’s right at his heels. But there are some risks he can’t help taking.

The fuse is lit…

My Thoughts:
The Elemental series is perfect for fans of contemporary books who don’t mind a little bit of paranormal action in their books. I think I love this series so much first because of the characters, but second because of how real the world building feels. The “super powers” of the Merrick brothers seem realistic in the world Brigid Kemmerer has created, a lot because of that elemental connection.

While the first book, 'Storm', focuses on Chris, ‘Spark’ lets us read from the perspective of one of Chris’s older brothers, Gabriel. Gabriel is really the perfect damaged bad boy character, especially because you get to read from his point of view. You see his anger, fears, and insecurities, while also seeing his love for his family and how he feels about Layne, our other main character. While the first book in the series set up the world of Elementals, ‘Spark’ focuses more inward on Gabriel himself as he tries to navigate high school while learning to control his ability. However there’s always the larger fear of the Guides in the background, so you never lose that main plot point of the series.

Changing narrators in a series can be tough, but I think Brigid Kemmerer pulls it off quite nicely. If you've read 'Storm' you probably already love Gabriel's snark and his ability to be both hot-headed and sympathetic. The beginning of ‘Spark’ also has enough glimpses into some nice Chris/Becca moments that you can appreciate while starting to enjoy the new narrators (and believe me, you will definitely fall for Gabriel). While I didn’t enjoy Layne’s point of view quite as much as I did Becca’s from the first book, I still appreciated her as a character. What I love about Brigid Kemmerer’s writing is that she writes characters who might sound stereotypical on the surface, but they end up being original and full of depth.

Beyond the romance element (which I really enjoyed), Gabriel’s journey also involves an arson mystery that will leave you wondering who's to blame. All of this leads to a lot of tension between Gabriel and his brothers, and to the interesting development of a bromance between Gabriel and Hunter (loved their banter!). Overall I just really love this series, and I urge you to pick up these books if you haven’t yet. The series has quickly become one of my favourites, and I’m excited to see what happens next.

The Cover:
The covers for this series aren't my favourite, but I do love how they always represent the element well.